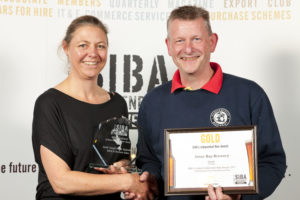 “Judges had a tough job separating the pack as the standard was extremely high once again. Lucky beer festival attendees at Drygate Brewery were able to try this and other award-winning beers immediately after the competition, something which is great for brewers too as they get to put their beers into the hands of real beer-lovers. The winners from the SIBA competition are officially the best independent craft beers in the Scotlandregion, something brewers should be extremely proud of.”Buster Grant, SIBA Chairman.

The SIBA Scotland Independent Beer Awards judge a huge range of beers across a number of styles in separate cask and small pack (bottle and can) competitions. As the awards are judged mostly by brewers, industry experts and beer journalists the SIBA Independent Beer Awards are very much seen as the prestigious ‘Brewers’ choice Awards’ by the industry.

Inner Bay Brewery are delighted with the win, especially as it comes so soon after the launch of their bottled beer range.  It highlights that Jasper is a quality beer, low in alcohol content, but rich in flavour with an elegant complexity of coffee, caramel and smoky hints.